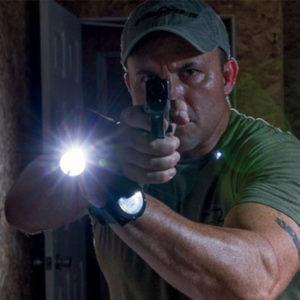 Before you read the article I havegive you some information on the author, Jeremy Stafford.  13 plus years USMC. Recipient Bronze Star Medal With Valor.  Deployments all over the globe.  Currently a Los Angeles Police Officer and a senior firearms instructor at the Los Angeles Police Academy.  His credentials are some of the best I’ve ever seen and there way too many to list here.  I know Jeremy and I’ve seen him in action.  He’s one of the best.  Click on the his name below for a linked short bio published on PoliceOne.com.  Expect to see more from Jeremy on the 805CCW website in the future.This article was originally published in the Guns & Ammo Magazine on March 21, 2018.  Express Permission was granted by the author, Jeremy Stafford  for 805CCW  to use the article in its entirety.

The Harries technique is also misunderstood, and I have seen instructors move shooters from an isosceles shooting position into a Weaver shooting position to accommodate the Harries. This is nonsense! The underlying principle behind the Harries technique is isometric tension. This tension can be created in the isosceles by bending the elbows slightly and rotating them downward. There is no reason to move a shooter from Iso to Weaver — that’s weak instruction by people who don’t understand principles and simply regurgitate dogma. Avoid these trainers.

The last technical thing that I want to talk about is controlling the switchology of the flashlight. The best way to run a light is with a tailcap switch. Under stress, there is no rotating of the light to find a side-mounted switch. As soon as one grabs the flashlight, the thumb automatically indexes to the switch. It’s fast, reflexive and repeatable. As far as the type of switch, I prefer a constant-on, or “clicky,” switch. I understand the arguments against them, which is that you might inadvertently click it to constant on under stress, but that’s an easy fix. Just click it again. I appreciate the ability to keep the light in the on position quickly if I need to, based on the tactical issue at hand, such as keeping the light directed on a threat during a reload so that the people I’m with can continue addressing the threat. Like anything else, try both types and decide what’s best for you. 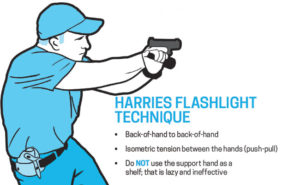 But what about firearm-mounted lights? If I’m going into an area with a high likelihood of needing my gun in hand, I’m going to be running my mounted light. Handheld techniques are not for those situations. But sometimes things don’t go as planned, and bad things happen to those unprepared.

Fighting in low light is tough. It’s unforgiving and scary, and your training should reflect that. If you have not yet availed yourself to serious low-light training, I implore you to do so. The SureFire Institute and Gunsite Academy are two training centers that I can recommend. There are also several independent trainers, such as Steve Fisher at Sentinel Concepts, who do great work.

Make sure that there is a robust FOF segment of training in the class; things that work well on the square range might not work as well when you’re getting blasted with Simunitions. It’s better to find out in training than when it’s for real. Commit to the lifestyle, go get trained!